In June 1988, the Stichting Market Garden Veterans Association was formed by Charles Reeves, George Drinkwater, Gerry Halfwork and David Dobson. Since that time 14 MGVA branches were formed, including H.Q. branch, and over 1500 Market-Garden Veterans in the U.K. were welcomed as member.

For the first program, held in combination with the 45th anniversary of the freedom of Nijmegen in 1989, all Veterans were accommodated with host families in the area and I and my wife Maud had the privilege to be one of them.

We responded on a request for host families in the Gelderlander newspaper early in 1989. During my college time I spent half a year as a student in electronics at Pye in Cambridge and I fancied the idea to have English guests for some days.

So, my motivation to become a host is most probably different from the motivation of the elderly host families who experienced the war themselves, and to be honest I had never heard about Market-Garden and its relationship with the Battle of Arnhem. In my youth I was only confronted with the war when I said “Mum I’m hungry”. My mother than told me that I meant “appetite” and that people were hungry during the war.

Since September 1989 we received many MGVA guests, and over the years I became more and more interested in Operation Market-Garden. My interest was encouraged by the numerous letters which I received from Veterans, by the information in the form of books and magazines I received and by the articles regularly placed in local papers. 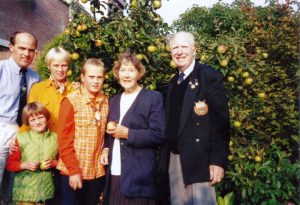 The family Been and their guests Michael and Maureen Brennan from Bristol, U.K. Michael served with ‘A compagny, 1st Battalion, The Dorsetshire Regiment’. Friday, 20th September 1996, 17.00 hrs