Thank you for the interest you have shown in the Market-Garden Battlefield Tour.

The tour itself will follow a route starting at Grave and moving onto Arnhem. It needs to be remembered that the actual offensive started nearly forty miles south of Grave and involved much bitter fighting there. Time limitations have led me to concentrate on the actions just south of Nijmegen and in the ‘Island’ that stretches between the Waal and Neder Rhine rivers; to do otherwise would have turned the tour into a coach trip. Instead we will look at a series of stands each aiming to highlight a different aspect of the operation. The Battlefield tour includes 38 pictures and sizes 1.6 MB, so downloading will take some time. The tour passes along: Grave, Overasselt, Heumen, Mook, Groesbeek, Nijmegen. Lent, Oosterhout, Elst, Driel, Arnhem and Oosterbeek. 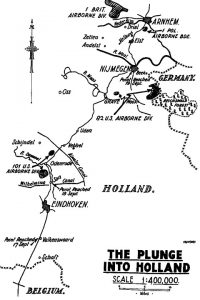 The Plunge into Holland

Yours sincerely, Jaap Been