Every day An Wolters from Nijmegen is reminded of her lost love Private Raymond J. McGourty. It was a love which should have been a casual aquantence.

By: Hans Peeters
NIJMEGEN · “Do you want to marry me An? They all say no.” An Wolters, only 23 years old, for a moment was glued to the dance floor. A proposal of marriage is not made every day and certainly not by a handsome Canadian soldier who only had asked you to dance a minute ago. “I don’t know”, An stammered.

It was a beautiful evening and in the Nimco shoe factory at Nijmegen. An Wolters, a grocer’s daughter from the Broerdijk, went to the dance with great enthusiasm. It was the only amusement for young girls in the declining days of the Second World War. You could also dance in the Twenty-One club of the Wintergarden at the Keizer Karel roundabout. Admittance was only given when you could show a note from the Parish-Priest.

At the Nimco they did not bother about such notes. There, the machines were removed during the weekend and in the factory hall the music of Glenn Miller’s ‘In the mood’ was being played.

It always was a special happening there. Nijmegen girls on the spree with their liberators. There never was a shortage of dance-partners: Britons, Yanks and Canadians. Fierce blokes from a countries far away. This was the attraction.

Raymond McGourty took An Wolters home that night. A nice fellow, from a big family, like the An’s family. Ray wanted serious company but An was not very sure that moment. They had words while they said goodbye then Ray disappeared to sulk in the dark of the night.

A week or so later An Wolters once again went to the dance at Nimco. No McGourty. “Are you looking for Ray” somebody called from behind her. “Yes”, she replied careless. “He is dead”, the sergeant replied with a hollow voice. “Ray’s truck was struck by a direct hit in town, at the Keizer Karel roundabout.” An was rooted to the dance floor.

In the following weeks she started to search for him. At the temporary Cemetery at the Oude Molenhutseweg she found Private Raymond J. Mcgourty’s grave. A white crosses with a metal identification tag. As a remembrance she took the shining silver tag back home. Several days later An brought flowers to the grave. But the grave had gone. Later, much later, she found her friends new grave below one of the 2300 headstones at the Canadian War Cemetery on top of the Sevenhills road between Groesbeek and Berg en Dal.

An wanted to adopt Ray’s grave. To be at his side and from time to time provide some flowers and to clean the headstone. He, so far from home and still so young, only 22, and had lost his life. She knew how much the boys felt at home here. They had been visitors at their homes on Christmas Eve. Big fellows crying under the Christmas tree like little children. An received a letter from the War Grave commission to say Ray’s grave had already been adopted by a lady from the Nijmegen quarter Waterkwartier. An went to visit to her competitor and bitter tears flew at the front door in the Nijmegen Waterkwartier. Her fellow-townswoman did not want to give up the grave. She had promised her son to adopt a grave in case he did survive the war.

Through a notice in a Veteran’s newsletter An Wolters found the address of her youthful lover and contacted the advertiser. She received a letter from Ray’s nieces with a passport photograph and an obituary notice: ‘We have loved him during life; let us not forget him after death’.

More than half a century later An still complies with the request on the obituary notice. She is eighty years old and has never married. From time to time she brings flowers to his grave situated on the top of the Sevenhillsroad. It is a place with a special atmosphere, where you can dream.

An gazes through the window of her little flat on the first floor of the Treubstreet in Hatert. She has never found her true love. Should Ray have become that? “Alas” said An, ” maybe the relationship would not have developed, I never would have emigrated to Canada.” A yellowing piece of newspaper trembles in her hand: ‘Let’s not forget him after death’.

Translation from the Gelderlander newspaper from the 17th November 2001 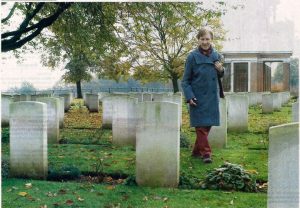