‘A document for Market-Garden Veterans’

On Sunday September 17th, 1944, North Brabant and Gelderland suddenly became the theatre of the biggest Airborne Operation of all times. From the sky, covered with 4,500 airplanes, no less than 20,000 Airbornes floated down like confetti above the fields between Eindhoven and Arnhem that day. After nearly four and a half years of Nazi oppression the firmament was opened and the liberators suddenly landed: Operation Market-Garden had started.

NIJMEGEN – No more destroyed buildings, no more tanks in the streets or soldiers everywhere. These images dominated the small corridor from Son to Arnhem nearly fifty years ago: the theatre of war of Operation Market-Garden. Only the silent evidence of the violence of war are still visible.

Robert Melsen from Grave has recorded the small corridor through the occupied area from the September days of 1944 as it is now. The inhabitant of Grave, being member of the foundation Market-Garden Veterans Association, has, together with his colleague Jaap Been from Malden, recently finished their video-film. The film with the title: “In the trail of Market-Garden” was displayed in the Limos barracks at Nijmegen for a select audience and around 100 British Veterans on Wednesday last week. The film is recorded for Veterans who fought at the allied side in Operation Market-Garden, often called as the “Battle of Arnhem”. Preceding the jubilee year to be held in 1994, Melsen wants them to relive the journey again from the bridge across the Kempish canal near Lommel to the Rhine bridge at Arnhem. English commentary of the recorded scenes is provided by Been. Also the scenes are alternated with pictures which show the situation at war time. Much of the material came from Henk Peters from Grave. From him and many others Been and Melsen received valuable information. So Melsen discovered that behind the general cemetery at Grave three English soldiers were buried, a fact probably not known by many inhabitants. “Maybe they can be remembered during future commemorations on the 4th May. Indeed, these boys gave their lives for us then”.

Old chaps
“The boys” of those days are old chaps between seventy and eighty years of age by now. Twice a year, British Veterans come to the Netherlands to commemorate the Operation. Next year the Airbase command will place the Limos barracks entirely to the disposal of about a thousand Veterans. Last Wednesday the film, which lasts more than two hours, was displayed to about hundred Veterans. A total of 75 locations were shown: from Lommel in Belgium to the Ginkel Heath near Ede. The film opens with the resound of trumpets having the English flag as background, and keeping the audience in suspense for two hours, as if each of the Veterans had to repeat the battle. Only when the stimulating march music sounds, is there room for a smile and a wink to each other. An individual beats the music time with his shoe.

Deadly silence
Impressive is the authentic accounts from a BBC war correspondent who, between the roar of the guns, reports the start of Market-Garden near Valkenswaard. Valkenswaard was the first town to be liberated in the operation. When Jaap Been, having arrived at the Uden war cemetery, places a remembrance cross – a ritual which is repeated at several war cemeteries – there was deadly silence in the auditorium. Video images, alternated with photographs of war, show the situation around cafe Den Tol at Velp, which is barely changed over the fifty years. The national highway was bordered with green at that time. Further on, in direction of Grave, the bridge across the river Maas is taken “again” under the sound of triumphant bagpipe music. Via Overasselt, Heumen, Groot-Linden, Malden, Mook and Molenhoek, Melsen and Been arrive at Nijmegen. There places like hotel-restaurant Sionshof, being the meeting place of war correspondents hoping to experience the crossing of the rivers, then were filmed. At Groesbeek the remembrance stone of the drop- and landing-zone at Klein Amerika, is respected; here, in 1957, a farmers son recovered the mortal remains of an allied paratrooper while ploughing. The paratrooper had been wrapped up in a green parachute. In many places the remains of the missing soldiers are believed to be still lying underground.

Angel of Arnhem
Via Groesbeek, Beek, Lent (now with the legendary mural “Lent of hope and glory”, a mural graffiti which is fostered), Elst and Driel the film crew of two arrive at Oosterbeek, where, along with other places, the house of Kate ter Horst who died last year, was visited. According to Jaap Been they were kindly requested to enter the house. Kate’s husband Jan wanted to see the script of the film and on such occasion added some remarks. During these fearful September days Kate ter Horst, while risking her own life, took care for no less than 300 soldiers in her own house. In the garden 50 British soldiers were buried. During her life Kate received several high distinctions for her work. The film ends with images of Ginkel Heath from where only 2,500 of the 10,000 landed paratroopers would return savely, the Arnhem Rhine bridge (now the John Frost bridge) which happens to be a bridge too far, and the images of the war cemetery at Oosterbeek. “We will remember them”, added a Veteran.

In September the film will officially released. Then copies can be ordered for the price of £17. For the Veterans, the film will certainly be a valuable document. 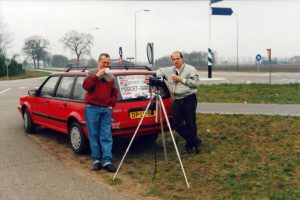 Robert Melsen and Jaap Been filming at Reek