Crossing of Veterans will go on after 1994

Mook – Also after 1994, oversee Veterans will continue to come to the Nijmegen area. It looks as though the Market-Garden Veterans Association, which organizes similar crossings twice a year, will continue to exist.

It was the associations’ intention to cease existence in 1994, fifty years after the liberation of this area. That moment has been regarded as a milestone, a suitable moment to stop. But what nobody expected previously: the interest of Veterans to visit the graves of their comrades, to revive old friendships and to attend commemorate ceremonies, is further increasing. “We will have to revise our statutes”, a spokesman of the association announced. “It is not acceptable, with regard to those people, to stop with this work in two years time”.

Impressive
The great interest for a visit in the area, where operation Market-Garden took place, was obvious once again at Mook. Three busses, with more than eighty British Veterans and their loved ones, came to attend a grave commemoration at the cemetery at the Groesbeekseweg. This, because of their presence, developed into an impressive manifestation.

Unforgettable
In her speech, the burgomaster of Mook C.Botman stressed the necessity to continue with commemorations. She said to be deeply concerned about the revival of neo-fascism everywhere. “It is important that the world never again suffers as it did nearly fifty years ago”, Mrs. Botman stressed. “The post-war generation has no idea how it was at the time.

The burgomaster thanked the Veterans for the fact that they and their comrades liberated this region at the time after four years and four months full of war and oppression. Charles Reeves, the president of the Market-Garden Association, quoted how he and his fellow comrades were welcomed by the Dutch population at the time. “Unforgettable” he said. “And that gratitude is still present, witness the fact how we are received again and again. We are very touched by that”. The British priest Bollard conducted a short ceremony which was backed by the Mook elderly choir. Bollard remembered the heartache which was left behind in the harts of the Veterans who left behind their friends and colleagues at the cemetery at Mook. “We should feel gratitude for the nearly fifty years of liberty, which your fellow comrades have paid for with their lives”.

After the traditional wreath laying, the ceremony was ended with the last post, a moment of silence, a collectively prayed Our Father and the singing of the Dutch and British anthems. Afterwards the Veterans were received in “de Schans”, where a lunch was offered by the Mook municipality. Earlier that day, the Veterans visited the liberation museum at Groesbeek; today they will be received at the Limos barracks in Nijmegen, after which a short ceremony will be held at the Jonkerbosch cemetery. Friday a visit is planned at the Volkel air-base; in the afternoon there is a reception in the Nijmegen townhall, here the Veterans will receive a Market-Garden medal. Today, the actual liberation day of this region, commemorations will be held at Groesbeek (Breedeweg) and Beek.

Translated from “The Gelderlander” from the 17th September 1992, by Jaap Been. 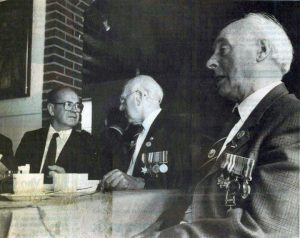 During a lunch offered by the Mook municipality, the British veterans revived old memories, 48 years after the liberation. This happened after an impressive memorial service at the war-cemetery at the Groesbeekseweg