Here we are better thought of than in England 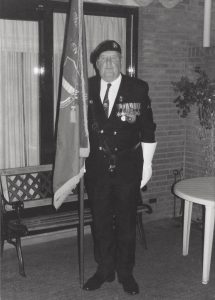 Dennis Sear with the Market-Garden standard in Malden in 1997

Malden – The Englishman Dennis Sear was one of the many Veterans who recently visited the area to commemorate our liberation from the Germans. Sear, 75 year old in the meantime, was very closely involved with the well-known operation Market-Garden, and for a week he was the guest of the family Jaap Been, in Malden. Regiodiek saw the Veteran, and looked back with him to the moving events during the war. “I was lucky to come back in one piece”.

Dennis Sear is back in Holland for the eighth time since the war. All those times, he has been a guest of the family Been in Malden. Maud Been very well remembers 1989, the first time that the Veteran was their guest. “At that time he was very reticent, and hardly said anything for the first two days. Only later did the stories emerge. “Especially the visits to the graves of his friends were rather emotional for Dennis”, says the resident of Malden.

The Cemeteries at Groesbeek and Milsbeek brought forth a lot of emotions then.
“Tears were running down my cheeks”, explains the great big strapping Veteran. Dennis Sear was called up for the British army in 1941. Before he came to Holland in the autumn of 1944, he was stationed in many other countries. “In total, I was in eleven different countries, including Algeria, Sicily and Palestine. So, I saw quite a lot of the world. And this all “at His Majesty’s expense”, Sear explains, smiling.

Older brother
Dennis Sear was employed as a cook in the British army. “Nearly all big boys went to the catering school in those days. I used to cook daily for about 60 soldiers. This was quite a job. I also remember that I regularly took some tins of corned beef to a young family with a twin. They lived somewhere in the middle of the woods and were really starving. They were overjoyed when I visited them, Sear explains”. He rarely cooks at home any more. “I only go in the kitchen to make a cup of coffee” he tells us, smiling.

Other than being a cook, Dennis Sear, who was younger than most of his comrades, also acted as an older brother. “They came to me to talk about their premonition of dying. Some of them were really scared that they would not survive the war. I then made jokes and told them: ‘Don’t be silly, everything is gonna be all right’. Nevertheless I lost some good friends at the time”, comes sadly from the mouth of the Veteran. Dennis Sear also wrote letters for those who could not read or write. “Quite often they concerned very personal matters. In fact, they considered me to be like a brother who could support them in hard times. I was a sort of a social worker to them”, Sear explains. Each time the Englishman comes back to Holland he is astonished about the appreciation and the admiration that is showered upon him and his colleagues. “We are treated here as real heroes. This really surprises me, as it was not so very special what we did. We fought a little bit for ourselves as well”, Sear modifies the hero-worship. On the other hand, the Veterans are hardly treated as heroes when back in England . “People like us are forgotten in England. We only receive respect generally from our families. Furthermore, we only receive a low pension. It really is not necessary to pat us on the back, but a little bit more respect would be appreciated.”, is the opinion of the Veteran. “Here in Holland it is quite the opposite. Here we are better thought of than in England. 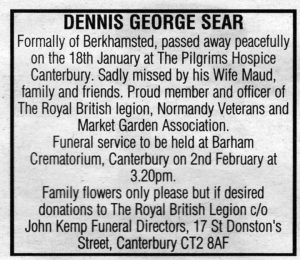 Here we are better people than back home (pdf)