Many inhabitants took the trouble to come to the centre of the city to see the Veterans – mainly British – marching through the Burchtstreet. Several hundred Veterans were present and, preceded by the military band of the Royal Dutch airforce and the piper band Batavorum Pipes and Drums from Nijmegen, they marched to the Traianus roundabout. During the parade, one of the veterans asked one of the spectators, with a typical sense of British humour, “Is this the way to Arnhem?”

In addition to the Veterans themselves, many higher authorities were present during the many meetings. Among them was General-Major E. Richter, a representative of the German authorities. He was present on invitation of the organising committee. General Richter was also present during the service in the St. Stevens church. Part of the service was in Dutch and part was in English. It was the third time the German General had attended the Market-Garden commemorations in Nijmegen. This has never happened in Arnhem or Oosterbeek.

At the Jan van Hoof monument on the Traianus square, which is dedicated to all those who, with Jan van Hoof, were killed in the liberation of Nijmegen, a British guard of honour of the Nijmegen company of the Grenadier Guards was in attendance at the ceremony. During the speech of the Mayor of Nijmegen, G. ter Horst referred to the historical period which brought about so many radical changes in the city: “It was a period which left behind many visible and not visible marks to those who fought for freedom. Freedom is a valuable concept. We have to pass this to our children and learn them that freedom consists of many small pieces of freedom,” according to Ter Horst.

Charles Reeves, one of the Veterans who, with the 43rd Wessex Division, helped to liberate Nijmegen, spoke on behalf of the Veterans. He recalled the difficult journey which he and his comrades had to fulfil from the beaches of Normandy to Nijmegen. Many hundred of his division died during the advance. After a heavy battle in France, his division received a few days leave in Brussels. This leave was cancelled early, as they had to prepare themselves for a move to the Belgium border. From there operation Market-Garden was launched, and Reeves and his men finished up in Nijmegen.

After the ceremony, the veterans took the opportunity to capture the Waal bridge for the last time. This happened in historical vehicles. During the event, the road bridge was closed for the traffic.

Translated from the Gelderlander from 21st September 2004 by Jaap Been and Jean James. 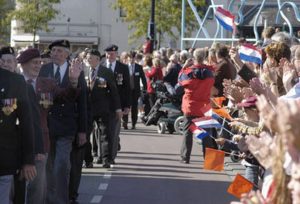 The parade of Veterans in the center of Nijmegen heading for the Traianus roundabout. (photo taken at Kelfkensbos)