THE NIJMEGEN AREA – The little-known village Alphen, a village concealed in the countryside of Maas and Waal, yesterday was nearly 12 hours ahead of the rest of the Netherlands. While the whole country was in a ceremonious silence at 8 o’clock yesterday evening, Alphen had already experienced the same moment early in the morning, after the celebration of the Eucharist in church.

It was one of the variations on the call to remembrance which yesterday took place on many locations in the Nijmegen area. Speeches, the Dutch National anthem and the Last Post: these in general were the fixed program items which determined the sacred atmosphere at the remembrance monuments. However, neither the speeches nor the musical notes could make more impression than the absolute silence, which, like a blanket was laid over the area at 8 PM. On the Canadian War Cemetery, exactly between Groesbeek and Berg and Dal, even no cough could be heard.

Amongst the hundreds of people being present, there were surprisingly many younger children. They also were involved with the ceremony. Wax lights were placed near the cross of sacrifice by Children, while a piper was playing. Unfortunately most of the lights were blown out immediately by the wind.

Also the Mayor of Groesbeek paid attention to the youth by saying: ‘Also many young people here found their last interment’. We at the time swore that it should never happen again, however, it has proven that this is a difficult mission, when we face the many places of war which daily costs human lives. We literally have to educate the new generations in tolerance and understanding.

There also was another prominent guest: the ambassadress of Canada, Mrs. M. Bernard-Meunier, who had preferred to lay a wreath in the Nijmegen area to commemorate the victims of the 2nd world war.

Translated from ‘the Gelderlander’ newspaper from 5th May 1997 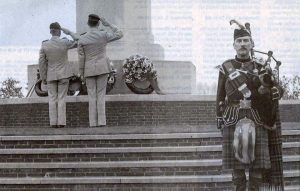