MOOK – Most probably a few British veterans will once again cross the North Sea to remember their fallen comrades at the Mook war cemetery. The next and possibly last big commemoration on 16th September is almost here, 65 years after the liberation. On 17th September 1944 Mook was captured by American soldiers.

Unfortunately the 505 Parachute Infantry Regiment came too late and could not prevent that the railway bridge across the river Maas was blown up. On 20th September there was another German attack and in the afternoon the village was captured by the Germans again. The same evening – with the help of British soldiers – Mook was recaptured from the Germans. The village along the river was heavily damaged due to the acts of war and eight inhabitants lost their lives.

The War Cemetery of Mook is situated opposite the civilian cemetery. 322 allied soldiers have been buried here: 297 British, 11 Polish, 10 Canadian, 3 Australian and 1 from New Zealand. 304 of them served with the Army, 15 with the Airforce and 3 with the Navy.

Most of the men buried here died between September 1944 and March 1945. Others died between September 1944 and October 1944 in the Betuwe between Nijmegen and Arnhem. They were re-interred later by the Americans at Mook. A plaque recalls the past: ”The soil on which this burial ground has been placed was donated by the Dutch citizens as an eternal resting place for the fallen of the Navy, Army and Airforce who will be remembered here.”

The “Old Vets” are being received for the last time on 16th September by the Mayor of Mook. Around noon wreaths will be laid at the Mook War cemetery.

The Director of the Groesbeek Liberation Museum, Mr. Wiel P.H. Lenders, regrets that some cities will stop with the commemorations because of the reducing number of Veterans: “We are talking about the biggest conflict in the world history. The war has still not been forgotten. Our museum is receiving 40% more visitors this year.

Translated into English by Jaap Been and Nick Lambrechtsen from the Gelderlander of the 18th August 2009. 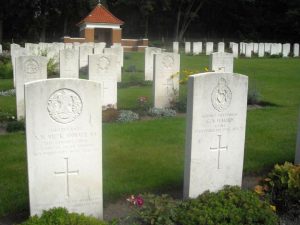