MALDEN – In the spring of 1945 a large military airstrip was constructed north of Malden. Jaap Been is very knowledgeable about this. The Gloster Meteor was the first allied jetfighter to be used by the allies. In March 1945 this extremely modern British aircraft came to the mainland of Europe. Airstrip B-91, situated at Kluis near Nijmegen was the first airstrip to use this aircraft. 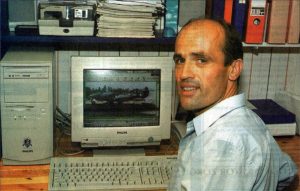 This is one of the many stories about the airstrip collected by Jaap Been from Malden in the past six years. He collected the information from Veterans of the war and elderly inhabitants of the village. He explored the archives of the Royal Air Force and other sources receiving much of his information from the Internet.

Using the Internet, Been makes his collected information available to interested people all over the world. Maybe he will write a book about it later. “This is only a matter of time. I am only looking for some more details and additional information. One day I hope to come into contact with a British soldier who actually helped with the construction of the airstrip”, says Jaap Been

The 45 years old Been became interested in the subject in the summer of 1989 after he saw a request for families to provide accommodation for Market Garden Veterans in the newspaper. Seventeen years before Been had studied in Cambridge as a student in electronics and he thought of having British guests so that he could improve his English.

Every year different Veterans visited him and his family. From one of these visitors he heard about the airstrip. Jaap Been, who has lived in Malden since 1981, was fascinated by the old airstrip. However, he quickly discovered that there was not much information available about the airstrip in wartime books. For that reason he started the search himself.

During the war airstrip B-91 stretched from the present ‘Mill quarter” in Malden – more or less from the present Vuurvogel 2 school – to the most northern goal of the (Rugby) Union football pitches of 1999. It only took the Airfield Construction Corps about 5 days to construct the 160 hectares airstrip in March 1945. The airstrip at the hamlet of Kluis was necessary in the framework of operation ‘Veritable’ to provide massive air support in the large scale Rhineland operation. Ultimately terminating the Second World War.

The Allied forces did not want to repeat the mistakes made in operation Market Garden carried out in September of the previous year. The Dakotas, Typhoons, Tempests and Gloster Meteors operating from Airstrip B-91 destroyed the German air defenses. Contributing to the successful crossing of the Rhine near Wesel by the British, American and Canadian forces.

Readers wanting more details about these flights are invited to visit the homepage of Jaap Been. There is also information for anyone interested in Malden. Been had many discussions with the elderly inhabitants living in the area when the airstrip was there. This yielded thrilling stories about the 13 demolished houses that stood in the way. Tanks pulled them down, literally driving through these houses. Bulldozers buried the remains of the buildings under the Malden-Nijmegen soil.

The nearly forgotten airstrip was only in use for a few weeks. The last military flights were at the end of April. In May Prince Bernard of the Netherlands was at Airstrip B-91. He came by jeep and departed by airplane. This was the last flight from Airstrip B-91.

Translated from ‘De Gelderlander’ newspaper of 25th September 1999, by Jaap Been and Ron Withill.