On 17th August 1956 Fieldmarshall Montgomery visited the Philips plant in Nijmegen. It became a real triumphal procession for Monty, who liberated Nijmegen from the German occupation during Operation Market-Garden in 1944. On this occasion Montgomery received a transistor radio which was specially made for him. Via a long path, the beautiful wooden radio found its way to the exhibition room of Philips Nijmegen.

After the death of Montgomery in 1976, the radio was returned to Nijmegen. The set disappeared somewhere in a drawer and remained there for many years. Some time ago, the 40-years old electronic engineer Jaap Been, employed at the Quality and Reliability department of Consumer ICs, heard about the old radio via his former boss. Since that time Jaap has put himself up as the ‘keeper’ of Monty’s old radio. Jaap Been, who’s occupation is in the field of radio ICs: ‘Because of my work I was very interested in the radio of Montgomery.

My former boss found it a pity that the radio was still in that drawer. We first placed it in the demonstration room of our department but finally, after a new exhibition room at the Nijmegen plant came into use, the radio was moved again. It is a very special set, specially made for Montgomery and it took at least a month to make it. It is one of the first transistor radios with only medium wave band reception. The radio is in perfect condition and still operates. It needs old style 3 Volt batteries, batteries which are now difficult to obtain’.

Rebuilding
The visit of Fieldmarshall Montgomery was part of a large inspection journey, which was made by the British through different European countries. Also in Nijmegen – the town which declared him a freeman – Montgomery had a look at the rebuilding. During the 2nd World War Montgomery received a great reputation as general. He defeated the Germans in the desert at El Alamein and bears since that time the honourary title Montgomery of Alamein. He was in charge of the ground forces during the invasion at Normandy and lent his initials to the famous Operation Market-Garden, which resulted in the liberation of Nijmegen (and the failure at Arnhem).

For that reason Montgomery was received as a hero at the Nijmegen plant more that 10 years after the 2nd World War. A passage from the Gelders newspaper of 18th August 1956: ‘… Almost the entire personnel – 1000 employees in total – had interrupted work for the salute. The girls in their white coats and the men in their blue overalls formed a long double row of honour. They all waved with English flags, while flowers were thrown richly… ‘. The former plant manager Dr.Ir. van der Spek then presented the Fieldmarshall a transistor radio, which would be in his possession until his dead.

Adventures
Jaap Been: “The 2nd World War and for that reason also Montgomery – in general being regarded as the liberator of Holland, is once again of general interest these days. For it is this year the 50th anniversary of Operation Market-Garden. The events will also be commemorated at Nijmegen on 17th and 18th September. During this period large groups of Veterans will be present at Nijmegen. Since 1989 I have had Veterans as visitors every year. In that year I saw an advertisement in our local paper with a request for host families. I registered as I once studied in England. It was a success and gradually I became interested in the adventures of the Veterans.

Now the story of Monty’s old radio is also known by English Veterans. By his soldiers Montgomery was very popular. I gave the photos of Montgomery with the old radio to one of the Veterans who was my guest. At this moment these photographs hang in the club room of the Market-Garden Veterans Association, where Veterans meet every Saturday evening.

Translated from the ‘Philips Koerier’ of 25th August 1994. 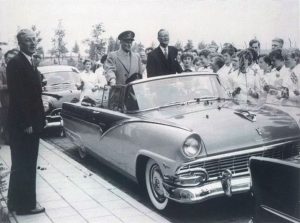 The arrival of Fieldmarshall Montgomery at Philips Nijmegen 17th August 1956 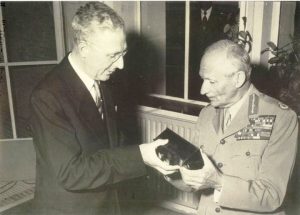 The presentation of the transistor radio by plant manager Dr.Ir. van der Spek

I was told that Montgomery, did not drink, did not smoke and was averse from woman