From our reporter
GROESBEEK – As busy as it was on the Canadian War cemetery at theSevenhillsroad, so deserted was the centre of Groesbeek on Saturday afternoon. Except for a few national colours there was no sign in the village centre of the Canadian commemoration dedicated to the liberation of Holland which took place a few miles further on. Even the little flags on the electric light standards were missing.

‘One should hope that they will not return via Groesbeek’, was the criticism of a passenger as a reaction on the sad look at the centre. At the same time the Sevenhillsroad look liked a second invasion. At the entrance of the cemetery the veterans were welcomed by the Air Force band, who formed a guard of honour. For both young and old it is was exhausting as the sun was burning mercilessly. By the guard of honour many guards fainted and fell.

Seven musicians were carried off. As one of them felt so distressed on the ground he was brought to the Nijmegen hospital to have his injuries treated. The tens of toilet units render a good service. Before they climb on the large tribunes, the veterans massively made use of the opportunity to do a pee. In large queues and in the order of arrival they were waiting for their turn. Also for many veterans the heat is too much. They were brought to the many first aid posts. and had to miss a large part of the ceremony for which they had travelled so far.

The waiting is for the many VIPs, like the Canadian Prime Minister Jean Chr,tien, the Dutch Prime Minister Wim Kok, princes Margriet, her husband and the ambassadors of many allied countries. At the entrance of the cemetery burgomaster Prick of Groesbeek and commissioner of the Queen Jan Terlouw are waiting to receive them. When many tens of wreaths have been laid at the Cross of Sacrifice after the impressive ceremony, also people of Groesbeek like Frits Verheij and Nol Seadt from the Dutch resistance and the local youth got the opportunity to lay a wreath. Then the great mass of people dispersed.

Unlike the other high official guests, the Prime Minister Jean Chretien leaves the area reserved for VIPs. With the old Veterans he slowly walks and halts between the headstones. His bodyguards got more and more overheated.

Translated from ‘the Gelderlander’ newspaper from 8th May 1995 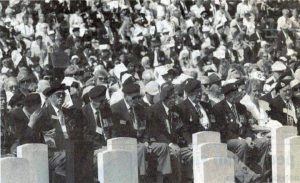