Nijmegen – Queen Beatrix and the British Prince Philip have inspected the Grenadier Guards in Nijmegen. Both attended the 65th commemoration of the liberation of Nijmegen yesterday, the concluding piece of four days of ceremonies with respect to Operation Market-Garden. The ceremony attracted the attention of thousands of spectators. A wreath was laid by the Queen to commemorate the liberation and the victims. 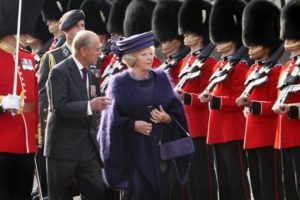 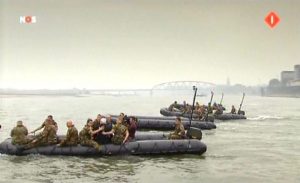 Nijmegen turned out as never to be forgotten

The Battle for Nijmegen by far is not that well known as the Battle for Arnhem. Although the City along the river Waal was liberated on the 20th September 1944, the suffering was not over. Together with distinguished guests – Queen Beatrix was one of them – the city of Nijmegen stood still by the event.

Nijmegen – A mainly closed city center, a closed Waal bridge (from 6:00 – 22:00 hrs), hundreds of policemen, security forces from three different countries and numerous concrete blocks as an extra safety measure, Nijmegen yesterday experienced a trough metamorphoses, to become the scene of the largest commemoration of the city ever. 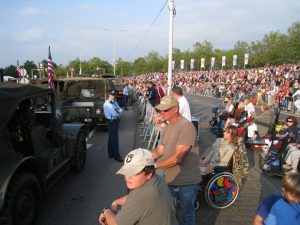 The extreme safety measures mainly had to do with the distinguished guests from the Netherlands and from abroad. One of the guests present during the commemoration in the afternoon at the Traianus Square, not far from the Waal Bridge, was Queen Beatrix. Together with Prince Philip she laid a wreath and inspected the British Grenadier Guards who at the time were involved with the capturing of the Waal Bridge.

Wreaths were also laid by the American General David Petraeus, the American Ambassador Fay Hartog Levin, her Polish colleague Janusz Stanczyk and German colleague Thomas Laufer. The Battle for Nijmegen, 65 years ago, is less well known than the battle for Arnhem although both were part of the same operation, Operation Market-Garden. Indeed, Nijmegen was liberated but remained a frontline city for seven months. “Nijmegen’s 2,200 civilians killed and the city’s destruction was one of the biggest disasters of the 20th century.” This was quoted by the Mayor of Nijmegen after the historian Joost Rosendaal.

The large nature of the event was marked by the distinguished guests’ public acknowledgment that the veterans who were present today would most probably not be present for future commemoratives. At the closing of the commemoration, the attending crowd of thousands watched the tour of historical vehicles and followed the ceremony from the slope of the Traianus Square.

Earlier that day the heroic Waal crossing has been commemorated at the Oosterhoudsedijk. According to the municipality and the police the commemoration passed by without considerable (traffic) problems.

Translated from the Gelderlander newspaper of 21st September 2009 by Jaap Been and Joseph Ruiz.