By Hans Peeters
Nijmegen – This week they went to the register at the town-hall of the country town Bellville in America. Since that time Percy Diamond from Illinois has another legal son. A son of 51 years old. Now Gerardus Christianus van Aldere from the Grotestraat in Nijmegen officially may say daddy to the man he is trying to find his whole life. Let me explain this. Gerrie van Aldere grew up with his grandfather and grandmother in the Nijmegen quarter of Willemskwartier. Very friendly people of which he thought they were his parents. At his 17th birthday they told him the truth: their daughter had had a relation with an American soldier who was billeted here at the end of the war. The daughter left them a war time baby called Gerry and disappeared out of sight. Percy Diamand, his natural father, in the mean time build up a new life in ‘The States’.

The years passed by till the moment that Gerry Aldere – who was a father of a family himself – pangs of conscience. He must find his natural father. It was quite a task with only an old war time photograph and a name. The Liberation Children Association gave him a helping hand. And so it happened that van Aldere, after more than half a century, found a track of his father, who is 72 at the moment. Several weeks ago he was nervously waiting below the exit sign in the arrival hall of St. Louis-airport. They had never met before. But, one glance was enough. After half a century, Gerry van Aldere could embrace his real father. Fourteen days they only spoke about the past. This week Gerry van Aldere returned with the KLM 618 at Dutch soil again. He still cannot comprehend: ‘The embracement. It was so intensively and natural, like we had met yesterday. And there is only one difference between dad and me: He is one head bigger. ‘By the way: they told me that I have Indian blood. My grandfather belonged to the Cheoki family, very proud Indians who ruled the Southern States those days.

Brother
‘Suddenly I am the oldest of three sisters and a brother. They don’t want me to be a half-brother, like I would have been here. They want me to be their brother’. Percy Diamond, an old age pensioner who was a civil engineer, will visit Nijmegen during the summer festivities next year (4-day marches). After half a century Percy Diamond will return to the city from where he once marched away, from the city which he liked very much. Yesterday Gerry van Aldere went to the register at Nijmegen. By now he will continue his life as Gerry Diamond.

Translation from the Gelderlander newspaper from the 30th November 1996 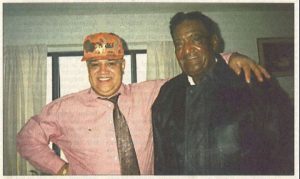