Memorial service on 4th May with dignity commemorated

Mook – In the presence of many veterans a large and dignified commemoration was held in the morning of 4th May at the military cemetery at the Groesbeekseweg. In contrast to the commemoration during the autumn of last year it was shining weather, which gave the meeting an extra dimension. Worldly and ecclesiastical authorities glanced back to the past during the commemoration and recalled that many at the time gave their lives for the liberation here.

“Today, is not a day like all the others”, so started the Mayor of Mook Mrs. Botman her speech. “It is a day on which we remember that it is fifty years ago since we regained our freedom”. Well before half past ten many people were present at the cemetery. At the entrance the drum-band of the Royal Air-force was playing. Towards a quarter to eleven the veterans arrived, brought by beautiful red double-deckers. The veterans were lined up in two broad lines after which they, conducted by the Mayor, entered the cemetery to take position on the chairs which were set out before. First Mayor Botman started with an introduction. In her words she underscored the privilege to live in freedom. “This freedom is a dream for many people all over the world”, according to Mrs. Botman. “Everybody knows how different it was during the period 1940 -1945. A repetition of this dark period should never happen again”. Thereafter she recalled that it was the last time for her that she could conduct these commemorations. She thanked everybody for their devotion and finished her speech with “God bless you”.

Thereafter speeches were held by the British pastor, also being present, and by pastor van Dijk from Mook. Then wreaths were laid by the Mayor, the military dignities and a lady who at the time was with the resistance herself. The whole ceremony was accompanied by hymns, sung by the Mook choir.

Litho
After the ceremony the party was split up in two parts. One group went to “the Schans”, the other group to the community centre. There an extensive coffee-lunch was waiting, which was well enjoyed by the guests. During the lunch a check was offered to Mrs. Botman by the veterans. The veterans herewith wanted to bring a contribution to the many expenses which were caused by the floods from last February. The veterans therefor had made a collection amongst the home front. A check in English pounds of about 3000 guilders (£ 1,342) was hand over. “The community will take care for a meaningful cause”, according to Mrs. Botman. The veterans came to the gesture as they were always very warm received by the community of Mook. The Red Cross of Nijmegen also received a check with a value of nearly 2000 guilders (£ 755). Herewith they wanted to make a gesture to thank the Red Cross for the good care always received. Also a present was hand over to the veterans by Mrs. Botman. They all received a litho of the church of Mook. The church of Mook was never destroyed during the war and for that reason it has always been a point of recognition. Half way the lunch the Mayor went to the community centre and also handed over the lithos there.

Translated from the “Regiodiek” from 9th May 1995, by Jaap Been 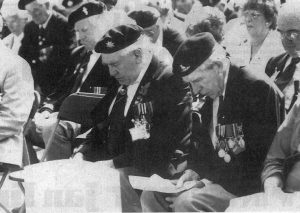 A prayer to recall olden times 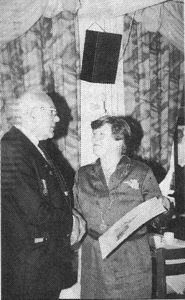