Nijmegen – Every year, around the 17th of September, as surely as autumn approaches, so sure is also the return of many veterans who helped to liberate this part of the Netherlands. In their sober blue blazers or bright Airborne-red jackets they travel through the region. Sometimes quiet, sometimes gesturing enthusiastically, they experience the emotions of seeing these places again, once so familiar during the war. They also reflect on the many comrades they lost then.

Nijmegen, Mook, Groesbeek: remembrance ceremonies and activities again took place everywhere, this year as in previous years. Yesterday morning the veterans were present at the Limos-barracks for a dedication of their standards. After that they were received at the Nijmegen town hall.

Book
The previous day, the priest of Groesbeek G.Thurling had arranged a memorial service for the veterans, which finished with the presentation of his book “Van Duivelsberg tot Groot-Linden” [From Devil’s Hill to Groot-Linden]. It tells the story of the tragedy about the occupants of an American troop-carrying airplane on “Market Garden Day”: 17 September 1944. The first copies of this book were presented to the veteran Donald I. Jakeway and the mayors of Groesbeek and Beers. Prior to this, a recording had been played of an emotional eyewitness account of the landing, made by CBS-correspondent Ed Murrow.

Plaque
In the entrance of Sionshof at the “Heilig Landstichting”, hangs a small memento to the great deeds, a plaque which recalls the events of 1944. As part of the liberation festivities, the veterans who are in the region at present will receive a translation of the Dutch text on this plaque.

On the 17th September 1944, the day on which the liberation of this region started, the Allied forces took over Sionshof as their headquarters. As well as a large number of officers, a diverse group of war correspondents, such as Frank Gillard of the BBC, Richard McMillan (1) , Eric Baume (2) and Cyril Ray (3), also took up residence in the Hotel. It gained an international reputation as a result.

Ten years later, on the 17th September 1954, these happenings were remembered at the request of the city of Nijmegen, on a remembrance stone on the outside wall of the Sionshof. It was unveiled by the retired major A. Bestebreurtje, who specially came over from New York for this occasion. Inside the hotel, a plaque was fixed to the wall. There was just one problem, as noted by Margot van Boldrik from Beek – she put on record the history of the liberation of Ubbergen – the Allied veterans could not read the Dutch text on the plaque. For that reason she translated the text into English. “Then they know at least what’s written on the plaque, when they come to the Sionshof”, commented Van Boldrik.

Translated from “The Gelderlander” of 19th September 1991,
by Jaap Been & Nick Lambrechtsen

(1) Richard McMillan worked for United Press,
(2) Eric Baume worked for the Daily Mirror,
(3) Cyril Ray also worked for the BBC. From all accounts, these war correspondents were a group of ‘colourful characters’. 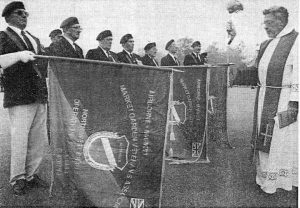 Yesterday morning at nine o’clock the veterans were present at the Limos-barracks to attend the dedication of their standards. After that they were received at the Nijmegen town hall