MALDEN – Last week several war commemorations took place in different parts of the country. In accordance with these commemorations a great number of Veterans, among others from Canada and Great Britain, visited Nijmegen and the Nijmegen area. Among them the 74 years old Englishman Robert Raybould who was billeted in Malden in the period January and February 1945 for several weeks. During the last months Raybould made a fierce attempt to find the address of the Malden Host family where he was billeted during the war. After numerous letters to different persons and institutions he succeeded in his mission. Together with his wife he visited the family Haerkens at Malden on Tuesday evening, the place where he was billeted 51 years ago.

In the living room of her residence at the Hatertseweg 6 at Malden, Annie Haerkens was tensely waiting for the arrival of Veteran Robert Raybould. She had some doubt concerning the expectation that Raybould was billeted with them during the war.

‘Well at the time we had many British soldiers billeted at our house, but in the letters from Robert Raybould I read quite a number of things which did not fit. So he wrote that he thought that the children had delivered their home work at home, but according to me that never happened. But as it is such a long time ago – I only was nine years old at the time – it is difficult to remember. We had considered picking up my father who is living in a residence for elderly people but he is 97 by now and besides his age he is rather deaf. And further more it is not for sure that it is the right address. In any case it will be difficult to recognise something as most of our house was burnt 22 years ago. For that reason we also don’t have any photos of the old house. However, part of the barn is still there’, Annie Haerkens explains.

Sleeping place
Exactly at seven o’clock Robert Raybould and his wife Irene arrive at the farm of the family Haerkens. Together with them are Jaap Been and his wife from Malden who are a host family for the British family. Raybould, a striking, strong appearance, equipped with many medals on his chest, enthusiastically introduces himself while he was anxious to have a closer look around the farm. Outside he immediately recognises the old barn. ‘That’s the place where I slept with ten other British soldiers at the time. I remember it quite well as it was rather cold and there was at least 25 centimetre of snow. Now I am sure that this is the right address. I am sure this is the right place’ he tells us self-confident. Also the house opposite the street is recognised by Raybould. ‘There used to live the village carpenter who at the same time was the undertaker’, he explains fully convinced.

Secret mission
The English man explains about his task in hand during his stay in Malden. ‘ I was one of a small and reliable Royal Artillery Detachment and our task took two to three weeks. We had to unload many tons of Artillery Shells and to hide them for different Detachments of Artillery. This all in preparation for that massive barrage of the Rhine Crossing at Wesel. We buried and camouflaged those explosives at night in bitter cold weather. Our task was strictly secret. I had great difficulty to keep our mission secret for my very friendly host family. Finally I suggested my host, Jan Verweij, against all military regulations, to hide all his valuable possessions in the cellar as I knew what was going to happen. Thank God he did. After the massive barrage, the Operation Veritable on 8th February 1945, we had to move and our host thanked me with tears in his eyes for that morsel of vital information that I had given him. He even asked me to stay, as I was a good man the Veteran explained while showing some old photos where he was a 22 years old soldier. Raybould further explains that he received a lot of help from Jaap Been of Malden during his search for his host family. ‘He found out an incredible number of things and he spoke with many inhabitants of Malden. Without him I never managed to find the family Haerkens. I owe him a great debt of gratitude for that. Jaap is a terrific guy. The return at this place after such a long time gives me a real satisfaction. It’s just great to see this place again.’

The 74 years old Robert Raybould was struck by a heart attack last Friday. In a critical condition he was admitted in the Nijmegen Canisius Wilhelmina Hospital. 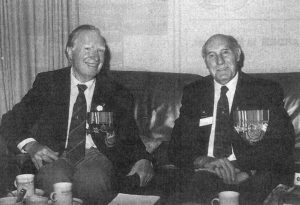 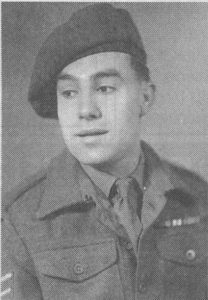