NIJMEGEN / SOUTHEND-ON-SEA – Peter Robinson DCM, the sergeant who as the first allied soldier on the 20th September 1944 steered his Sherman tank onto the Waalbridge and who captured the northern ramp of the bridge from the Germans, passed away last week. Robinson (84) was freeman of Nijmegen. After the war Robinson tenth of times visited Nijmegen. Most of the time he visited the family Ten Hacken-Aalders. Last Friday Mrs. Ten Hacken received the message that Robinson has passed away. ‘All those years we have been in regular contact. Peter Robinson visited Nijmegen with great pleasure. He was proud to be a freeman’. Robinson ‘crept’ across the bridge in his ‘Sherman Firefly’ at seven o’clock in the evening of the 20th September. Three other tanks followed him. That day the heavy fighting at the riverside started at eight o’clock in the morning. Both the Allies and the Enemy stopped breathing during the advance of the tanks. Peter Robinson later declared that he ‘had said farewell to life, as he was convinced that the bridge would have been blown up’. Safe and sound he arrived at the Waalbridge, but an inferno of fire had started. Peter Robinson’s tank was hit and came to a stand still. During heavy fire the sergeant stepped over to the next tank. With this tank he eliminated the two deadly 88-millimeter guns the Germans had positioned at the northern ramp at Lent. Seven years ago Peter visited Nijmegen for the last time.

Translated from ‘De Gelderlander’ newspaper from 20th December 1999 by Jaap Been. 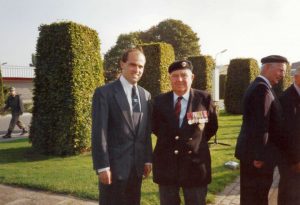