Nijmegen – The ride over the Waal Bridge of Veterans and soldiers attracted a great deal of public interest. The spectators showed great respect for the guns and old vehicles, and for the Veterans. Everyone could savour a little bit of the flush of victory. Idols of the liberation – The Veterans are soldier-heroes at close range. The admiration and joy of the spectators is immense.

The military ride of honour on that Sunday afternoon attracted a swarm of people to the Traianus Square at the entrance of Nijmegen. On the Waal bridge they formed an applauding lane for the Veterans and soldiers being escorted over the Waal bridge.A mother explained to her daughter: “These are the men that liberated the Netherlands 60 years ago”. After the National Anthems had been played, and the engines had been started, a little boy tried in vain to get a lift.

The respectful silence of the commemoration and the laying of the wreath came to an end. Two pairs of strong arms lifted a Veteran and his wheelchair on to a Jeep, with a driver who looks like a Che Guevara soldier. Another Veteran stood upright in a terrain car. He held a camera with one hand, whilst he made the V-sign with the other hand.Young people with picture books under their arms approached the Veterans during the ride across the bridge. A man touched the medals on the chest of a Veteran. The Veterans told them the story behind each one of the medals. “Wow” was the reaction of an admirer in his twenties. A little boy imitated the sound of a gun vehicle.

“This gives some idea of what those men experienced at the time”, said Berend (25) from Beneden-Leeuwen. “This is an opportunity to say thanks to the last of the Veterans. It is impressive to see them in the flesh. Thanks to their efforts, we can now live in peace. But it did not all happen without a great deal of hardship and resistance”.

“It is true to life”, was the opinion of Berend and his fellow-villagers, Richard (32) and Natasja (25). They did their best of take photos of as many cars, uniforms, and, above all, logos that they recognise from war films and war games. “That vehicle over there, pulling the gun. The fire power fascinates me. The damage is still visible! That machine suffered a lot, and so did the driver.

Fortunately the pain and fear are gone the 47-year-old Ruud Klaui, from Eemnes, said: “I cannot really appreciate the misery of war, as I did not experience it personally, which is just as well. Instead, I only feel joy. When you ride along, you can taste the flush of victory and sense the admiration”.Klaui, together with Robbert Jansen, from ‘s Hertogenbosh, crossed over the Waal bridge. They drive, as usual, on invitation. One on a motor bike, and the other on a bike. Klaui remarked: “This motor is a passion. My Father drove a similar one during his military service. It is a special one: a Harley Liberator, the engine of the liberation. The show of appreciation for the Veterans is tremendous. This procession of vehicles. This is why we do it”.

Emotions rose considerably on both sides. “Sixty years ago, I also saw those tanks pass by. But that was different, although at that time there was also a lot of admiration for them. At that time it was of disbelief”, according to Jannie Scholten-Beekman (66) from Leeuwarden. “Now it is of emotion. The soldiers who died were so young. Only boys, just like my sons and grandsons.”

Philip Wilkinson, an English Veteran, also recalled thoughts of those soldiers. The ride across the Waal bridge raked up old memories with this 81 year old man from Bridlington. “Memories, but also the tension and fears of those days. But happiness dominates, thanks to the smiling faces along the road. Purely and sincerely, thanks for the deeds of our past, and the great welcome on our return. It is fantastic to be able to celebrate all that again”.

Translated from the Gelderlander newspaper of 21st September 2004 by Jaap Been and Peter Barleycorn. 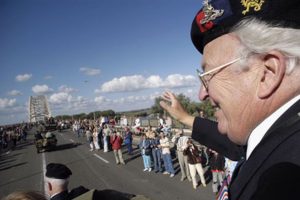 From a historic vehicle, a Veteran waves to the thousands of interested people who welcome the liberators at the Waal bridge