MALDEN – They operated behind the scenes for almost 25 years. Hospitality was their trademark. Thanks to the Stichting Market Garden Veterans Association Nijmegen thousands of War Veterans could visit those places from their Market Garden dropping zones in September 1944 from which they fought for our freedom; the fields of Klein-Amerika at Groesbeek, the Canadian, the Mook and the Jonkerbos War Cemeteries where their comrades are buried, the heavily contested bridges of Nijmegen and Arnhem.

Yesterday afternoon, after more than 23 years, the moment in military terms formally known as ‘closing down’ had come. The Cultural Centre Maldensteijn at Malden was the place where the Market Garden Veterans’ Association Nijmegen was officially disbanded. In former days the Association arranged accommodation for more than 4,000 ‘old-vets’. But the ravages of time meant that fewer and fewer members were able to keep the club of Veterans going. At their great age only very few individuals could visit the battlefields.

“A poor pension, the advanced age and failing health are the reasons that many Veterans are no longer able to visit our country”, states Ard van Hulst, the Chairman of the Association. Thirty-one pilgrimages were organized by the Association. Thanks to the Association, the old warriors found a reasonably priced place to stay in our country. The Nijmegen branch reached its logistical climax in 1994 when they took care of 26 coaches with Veterans, to commemorate a half-century of Market Garden. The year 2009 was also a highlight when Queen Beatrix and Prince Philip attended the commemorations in the Nijmegen area.

The Veterans Association worked hard to make young people aware of the horrors of war by arranging international exchanges. One of the guests attending the ‘closing down’ meeting yesterday was the Oberstleutnant Joachim Schmidt, the German military attache. The Veterans Association Nijmegen was the first organisation in 2002 that organised a reconciliation meeting with German Veterans at the German War Cemetery Ysselsteijn near Venray. This has become a beautiful tradition.

Translated from “The Gelderlander” of 19th December 2011, by Jaap Been & Nick and Ros Lambrechtsen. 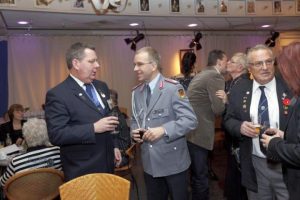