GROESBEEK – Not two, but three regiment standards were presented to the Liberation museum by British Market Garden Veterans last Saturday. Museum director Wiel Lenders had only expected to receive the Standard No. 1 Birmingham Branch and the National Standard of Great Britain, which would have completed the collection. Previously he had already received the standards of ten other British regiments. But Lenders was surprised when a third standard was presented: the National Standard of The Netherlands, which he did not even know existed. The two British standards immediately got a place in the museum with the ten other standards and the third one will take its place in the museum collection at a later point in time.

Lenders was extremely delighted. “Many standards are laid up in churches, but these veterans want them to return to the battle field. With the last standards our collection is complete. They will be given a place of honour at the exposition about Hells Highway, the memories of which are still very much alive amongst Veterans. Until the Belgian Neerpelt things had been easier but after this point, fierce fighting started for the liberation on Hells Highway.” The two standards were brought to Holland by some dozens of very old Veterans during their recent visit to the Liberation museum at the Wylerbaan in Groesbeek.

During an emotional ceremony the Standards were presented by the Veterans to museum director Wiel Lenders. A bagpiper gave extra resonance to this particular moment by playing The Last Post, as well as the national anthems of Great Britain (God Save the Queen) and the Netherlands (Wilhelmus). A Standard is an important symbol for any regiment. During an active operation the standard accompanied the troops, and was generally kept in a safe place far away from the actual front. After the war, the standards continued to be the focus of many ceremonies and commemorative occasions of the regiments.

The Market Garden Association has now come to a close, explains Peter Lloyd who, on behalf of the Birmingham branch, presented the standard. The reunion club has disbanded because of the small remaining number of Veterans who are still alive. It was felt that the time has now come to return the standard to its proper resting place. Along with the other blue-green Market Garden standards of the British regiments, the standard of the Birmingham branch can now be admired in the museum. Director Lenders explains: “The blue “Market” part refers to the airborne part of the operation. The green “Garden” part refers to the ground troops of the operation.” After the ceremony “luistersteen” (listening rock) No. 39 of the Liberation route was unveiled.

Translated from the Gelderlander newspaper of 19st September 2011 by Jaap Been and Jeannette Croft. 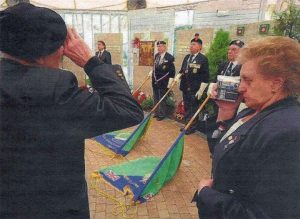 British War Veterans bring a salute to the standards they have just presented to the Liberation museum. Photograph Do Visser/De Gelderlander