NIJMEGEN – The official standard bearers, representing the twelve branches (sections) of the Market Garden Veterans Association stood rigidly to attention during the reception which was held in the Trêves-hall, City Hall Nijmegen yesterday. It was understandable as the British Veterans had decided to hand over their visiting-card, the branch standards (“one can safely call this their character”, according to MGVA president and Limos-commander Colonel Roelofs) to the municipality of Nijmegen. This happened symbolically yesterday, as the standards will only return to Nijmegen permanently when each of the thirteen branches decide to cease existence. The Veterans Association does not grow in number any more and the time will come that the monthly meetings of branches like those of Hemel Hampstead, East Anglia, London & Middlesex, and Sussex will come to an end.

Memorial-hall
What will happen with the standards then was asked by Charles Reeves and the late Captain White at the Nijmegen riverside in 1989. The commander of the Limos barracks came up with an idea. The national standard of the Market Garden Veterans could find an appropriate place in one of the Limos rooms, which could be furnished as a memorial-hall. Five years later, in September 1994, it became clear that the Limos barracks had to close down in due course. MGVA president Colonel Roelofs came up with the suggestion to lodge the standards in the Nijmegen townhall. Nineteen ninety five, exactly fifty years after the liberation, was found a nice opportunity to hand over the standards.

Sensitive
This was a very sensitive issue for the veterans, explained Colonel Roelofs, as there is no real intention to stop the branch activities at this moment. Then, as an intermediate solution, we will do it symbolically was the proposal. And that’s how it happened. Lord Mayor D’Hondt received all the twelve branch standards being present and also the national standard of the Market Garden Veterans. “A great honour to us”, so explained one of the Veterans. The standards will go back to Great Britain next week. But when they finally will return to Nijmegen, they will receive a place on a golden rod on the ceiling of the Trêves-hall. “Hear hear”, escaped out of the mouth of a single Veteran. For certain a good choice.

Translated from “the Gelderlander” from 3rd May 1995 by Jaap Been 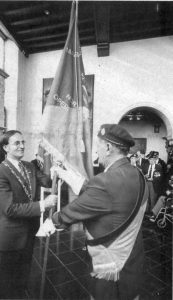