GROESBEEK – She had been in Groesbeek before. Twenty-five years ago, to be precise, as one of the ladies from the public remembered. “She had been our new Queen for only a few days, and, to our surprise, she attended the commemoration service”.

Smokey Smith became 91 years old the day before. However, this was not the main reason why he got a place of honour on the victory platform during the commemoration service at Groesbeek. Smokey Smith is the only living bearer of the Victoria Cross, the Cross awarded for one having displayed outstanding bravery. The Canadian Veteran got a place in his wheelchair between Queen Beatrix, Princess Margriet, Pieter van Vollenhoven, the Governor-General of Canada Adriane Clarkson, Mayor Prick of Groesbeek, the Secretaries of State Bot and Kamp, Generals, and other high dignitaries. But, in fact, the entire Canadian War Cemetery was full of guests of honour. From twelve o’clock onwards, 225 touring cars entered the Severnhill’s road to deliver the nearly 2000 Canadian Veterans for the sixtieth annual commemoration ceremony.

Veterans like Bill McArthur, from the Irish Regiment of Canada, who, in the Winter of 1944-1945 fought in the Groesbeek frontline, and his mate, Roger Rionflee, who was not there at the time, as he had been wounded in Italy.

Her Majesty was welcomed at the Cemetery by Mayor Prick from Groesbeek and by four members of the Royal Canadian Mounted Police, in their well-known red jackets. The Canadian War Cemetery at Groesbeek is officially Canadian territory. Here, 2300 of the total of 7600 Canadians who died during the liberation of the Netherlands are buried.

Governor-General Clakson, in her speech, reminisced that, during the war, a room in the hospital of Ottawa, in Canada, had been declared to be Dutch territory, when Queen Juliana stayed there during the birth of Princess Margriet on 19 January 1943.

Minister Bot, the Minister of Defence, thanked the Veterans. “If you should have a friend in trouble, you should stand up and defend him. This is what Canada did”. Wreaths were laid, the Last Post was sounded, and the Canadian Forces Band played the National Anthems.

After the service, Queen Beatrix signed the guestbook at the Cemetery. Thereafter she received flowers from the pupils Geke van den Berg, Kenny Janssen and Shadem Batravi, from the local Gerardus Majella School.

Finally, a reception took place in the large tent along the Sevenhill’s road. There, together with the Canadian Senator Eggleton, Alterman Giesbers did the honours. At that time, Mayor Prick, accompanied by Princess Margriet, travelled to Den Haag for a dinner at the Canadian Embassy. During the reception, 15 Canadian paratroopers landed on the rolling hills surrounding the Cemetery. Unfortunately one of them made an unlucky landing, and had to go to the Nijmegen hospital with a leg injury.

Translated into English by Jaap Been and Peter Barlycorn from the Gelderlander of the 4th May 2005. 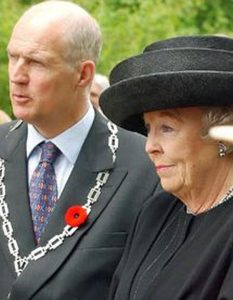 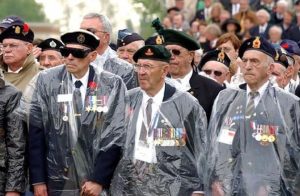