GROESBEEK – “Is it her, or is it not her?” Even the volunteers of the Liberation Museum are in doubt when a unknown woman – although she is wearing a hat – walks through the lane of the air-mobile brigade. But one could tell, by the swelling applause that Princess Margriet had yet to arrive. There is a sound of relief, “Ah, there she is”, and the cameras start shooting. The Princess is not wearing a hat today. Yesterday, Groesbeek celebrated a Liberation Day Festival at the Wylerbaan. It was for a limited audience, as little publicity was given for the Royal visit. About 200 people had gathered at the parking place of the Liberation Museum, where the last tree for the Canada Netherlands Memorial Park was about to be planted.

Glad
With the sound of the Royal Dutch Air Force band and the Groesbeek mixed choir, contentment reigns on all sides. The initiators, the Canadian Veterans J. Cupp and J. Knowles, were happy that it had been possible to create a “forest” at Groesbeek. It was a symbol of the historical alliance between the two countries. On the very spot where they took the first steps into liberated Holland, 53 years ago, everyone can now walk in the shade of the Canadian Maple Leaf. The representatives of the Dutch government were also satisfied. The Mayor of Groesbeek, Mr. Prick, had seen the “forest” grow from plan to reality. This was despite the proposals from Den Hague to create the remembrance forest in the northern part of Holland, rather than in the already green area of Groesbeek.

In his speech, the Minister of agriculture, Minister Van Aartsen, said he was proud of his officers who contributed to the realisation of this “forest”. He said, “This wood is the best example we can have for keeping alive our mutual remembrance.” For those remembrances – some good, some bad – the “forest” at Groesbeek is perfect, said Veteran Cupp to the audience. The bad memories were commemorated on 4th May, the good memories were told on Liberation day. In fluent Dutch, Cupp said: “Some years ago I attended a march with Veterans, and I heard a young girl asking her Father if those old men were really the people who liberated The Netherlands. ‘Were those old men able to fight?’, she asked him.

It took some time before the last tree for the Canada Netherlands Memorial Park was brought by helicopter. With a thunderous roar, the chopper landed on the small cycle track along the Wylerbaan. “The pilot could even land on a ten-cent piece, muttered a Canadian, with admiration, from behind his video camera.

Golden spade
The public defied the whirlwind of dust caused by the helicopter, and immediately understand why Princess Margriet had left her hat at home. The tree was planted by the Royal guest, with a golden spade. She did this, together with Veteran Cupp, once again symbolising the historical alliance between Canada and The Netherlands.

Translated from the Gelderlander newspaper of 6th May 1998, by Jaap Been and Peter Barleycorn. 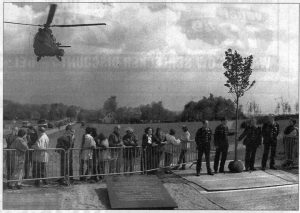